Why We Replaced 13 Years of Proprietary Code With Drupal 8 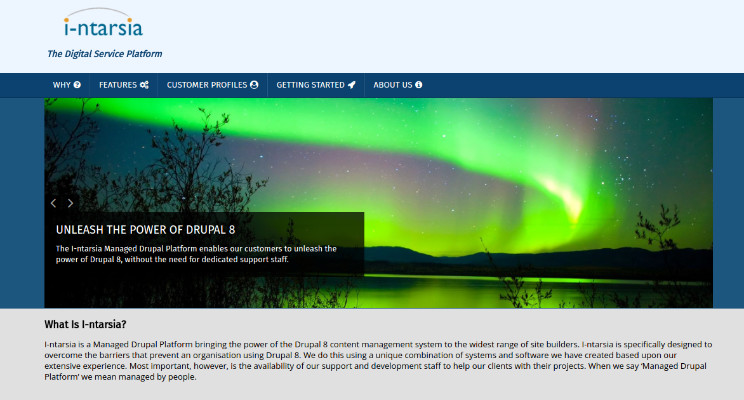 A Little Bit of Background

Having started building websites for clients in 1995, we quickly discovered the benefits of using standard platforms for site management. We didn’t find a solution to meet our needs then, in particular the commitment to CSS as a core of the edit process. In 2003 we launched our own content/website management system, I-ntarsia™.

I-ntarsia developed in scope and function very quickly, benefitting from a modular design. We were very early in the adoption of a cloud based infrastructure, automated provisioning, SaaS/PaaS techniques and business systems integration. This development was also driven by customers, large and small who used the platform to build and manage their digital estates.

The broadening of the platform as a whole, however, meant we had less time to focus on the core content management functions. About 18 months ago we created a paper design for an upgrade to the core CMS. Before cutting code, we benchmarked our paper design against the best content management systems out there. We were pleasantly surprised to find a fairly close match in Drupal 7 and a very close match in the yet to be released Drupal 8.

On the surface there would seem to have been a strong argument to develop the I-ntarsia platform on Drupal 7.

These facts might make our selection of the Drupal 8 platform questionable. However, here at I-Next there was no D7 vs D8 decision, there didn’t need to be once we researched the two versions. We moved to Drupal from our successful proprietary code base BECAUSE of Drupal 8.

Drupal 7 was the product of an intense period of organic growth in the Drupal community. The end result, whilst highly capable, leaves a lot to be desired from a systems design perspective. There are a number of reasons for this, some of which we recognised from our own experience:

Drupal 8 is a complete, ground up, redesign of the Drupal system. The Drupal Community decided to use the experience gained in developing and maintaining some of the world's most complex web services to build a system that was elegant and scalable as well as being familiar and easy for people to use. They have done a great job, and core issues were addressed:

So the outcome is a much, much better piece of software, but why should anyone care about that? Well, there are  huge number of reasons not least of which are:

That is why we replaced 13 years of proprietary code! On top of that the i-ntarsia platform puts Drupal 8 into a highly stable software stack with managed infrastructure which is maintained by a team of highly skilled, highly experienced engineers.